The objective for the management of the Fund is to achieve the highest possible international purchasing power with moderate risk. Risk is limited by diversifying investments. A benchmark index for bond investments that includes more currencies is in line with the strategic role that nominal bonds should play in the Fund.

In Norges Bank’s letter of 18 March 2011 on the investment strategy for nominal bonds, we stated that the strategic benchmark index should serve as a long-term yardstick for operational management and reflect the asset class’s role in the management of the Fund. To ensure the greatest possible openness and transparency, the strategic benchmark index must be based on leading, readily available indices. Changes in the bond index’s currency composition will have the greatest impact on risk in the bond portfolio. Expansion could improve the diversification of the bond index’s risk. A natural starting point for this index is to weight markets according to each country’s GDP.

Expansion of the benchmark index for bonds to include new currencies

In Norges Bank’s letter of 3 November 2008, we undertook a broad review of bonds issued in emerging markets. We recommended at that time that the benchmark index for bond investments should not be expanded to include emerging markets. This was because many of the new bond markets would not have been sufficiently investable for the Fund to provide a basis for a strategic change. 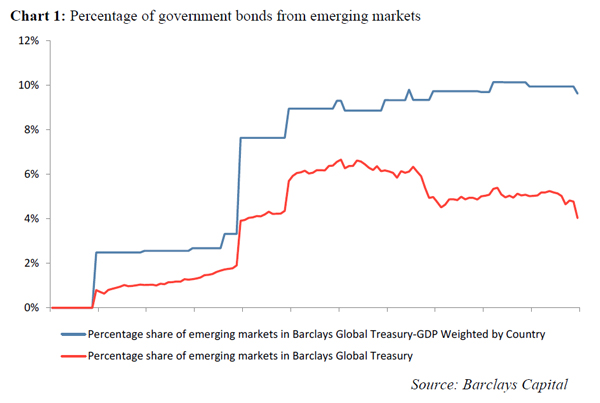 Enclosure 1 shows how the introduction of new currencies into the benchmark index from Barclays Capital, the index supplier, would have impacted on return and risk over the past decade. It can be seen there that the inclusion of emerging markets would have resulted in a somewhat higher return and helped improve the trade-off between return and risk when the analysis is performed in a common currency such as Norwegian kroner.

However, the Fund’s return is measured in international currency. A better starting point is therefore the return in local currency and in the currency basket defined by the index. In Enclosure 1, we show that introducing investments in emerging markets would have resulted in a substantially higher return with reduced volatility during this period. The improvement in the trade-off between return and risk now appears to be greater.

These calculations are based on leading and readily available indices. A number of large emerging markets do not meet the criteria for inclusion in the most widely used indices, partly because the regulatory system means that some markets are not investable for many investors. The Fund is currently invested in bond markets such as Brazil, Turkey, India and Indonesia which are not included in readily available and transparent bond indices.

In some cases, the Fund is in a different position compared to the average investor. For example, Norges Bank has been allocated a quota for investment in India. Another example is bond investments in Taiwan, which limits investments by foreign investors in its government bonds to 30 percent of an investor’s overall investments in the country. Taiwan is therefore not included in the Barclays Capital benchmark index. The Fund, on the other hand, has a substantial portfolio of equities in Taiwan, and so this restriction does not limit the Fund’s options. As mentioned in our letter of 18 March 2011, we have therefore chosen to include the Taiwanese dollar in Norges Bank’s operational benchmark portfolio.

Norges Bank recommends that the expansion of the strategic benchmark index for bond investments to include emerging market currencies is based on leading, readily available indices.

The Ministry of Finance requests a separate assessment of the possibility of including all of the currencies currently included in the Barclays Capital Global Aggregate (BCGA) index. The instrument-specific criteria such as size, credit quality and liquidity are the same for this index and the Barclays Capital Global Treasury GDP Weighted by Country index, as set out in the Ministry’s letters of 13 December 2011 and 30 January 2012 on a new benchmark index for the bond portfolio. The new benchmark index for bond investments is to contain both a government segment (government bonds, inflation-linked bonds and bonds issued by international organisations) and a private segment (corporate and covered bonds).

Besides the specific criteria for the selection of bonds, the index supplier performs a separate assessment of each individual currency. Emphasis is given to any restrictions on capital movements that limit investability. If a sovereign issuer no longer meets the criteria, government bonds in the currency in question will be excluded, while bonds issued by institutions and companies that still meet the criteria will remain part of the index.

The BCGA index included currencies from ten emerging markets at the end of 2011 (see Enclosure 2). Expansion of the Fund’s benchmark index for bond investments to include all the currencies included in the BCGA index will improve diversification across issuers but will entail a certain weakening of the benchmark index’s credit quality as currently rated by the large credit rating agencies. In a GDP-weighted portfolio of government bonds, the proportion of bonds with a credit rating of A or below will, in the event of such expansion, rise from 6.5 percent to 14.6 percent, and 3 percent of government bonds will have a credit rating of BBB (cf. Enclosure 2).

The introduction of a new benchmark index with these currencies will entail a change to the requirement set out in section 3-7 paragraph 2 of the management mandate that the Bank is to organise its management of the Fund with the aim that high-yield bonds do not exceed 3 percent of the market value of the bond portfolio.

The market for corporate bonds and covered bonds issued by financial institutions is still relatively undeveloped in many emerging markets. Emerging markets account for less than 1 percent of a market-weighted global index of bonds of these types. Norges Bank does not recommend including these new currencies in the strategic benchmark index for these types of bonds.

Norges Bank recommends that the strategic benchmark index for government bonds, inflation-linked bonds and bonds issued by international organisations is expanded to include all currencies included from time to time in the Barclays Capital Global Treasury GDP Weighted by Country index. Norges Bank does not recommend including these currencies in the strategic benchmark index for corporate and covered bonds.

Introduction of a new benchmark index with a broader currency distribution